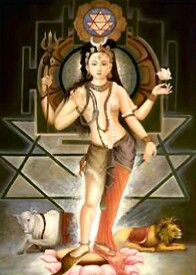 Mahakavi Kalidasa starts Raghuvamsha, one of his mahakvya with the following sloka:

In this sloka Kalidasa says it is impossible to separate the word and its meaning. The moment the word is uttered the meaning comes into our mind. The same is true with the Adi Dampati of the Universe Parvati and Parameshwara, they are inseparable. As one cannot separate the Sun and Sunlight so also Shiva and Shakti are inseparable.  We have heard when people say one had become “Shaktiheena” (dearth of energy), if Shakti completely drained Shiva too leaves the body to make it become Shava (corpse). Hence they say “Shakti bina Shiva Shava” Hence the form Ardhanareeshwara.

Once Maharudradeva was in seat of silence, Parvathi playfully came from behind and covered his eyes with both her palms. The heat from his body made Parvati to sweat and a drop of sweat from her body fell. From that drop of sweat emanated a blind child. At the same time Demon Hiranyakasha, the younger brother of Hiranyakashyapa was yearning for a child. The blind Child was given to him. He was named Andhaka. Andhaka grew and pleaded Brahma to restore his vision.

Andhaka along with his cousin Prahlada ruled the earth plane. Andhaka wanted to conquer Kailasa and wage war against Maharudradeva. After a long battle Shiva killed Andhaka, but at his last breath he uttered the name of Shiva. Hence in the next birth he was granted the post of Shiva Gana (Shiva Army). He was reborn as Bhringi who along with Nandi was in-charge of the gates of Kailasa.

Bhringi was an ardent devotee of Maharudradeva. He would not adore anyone except Shiva. To make him understand that Shiva and Shakti are inseparable, Shiva took the form of Ardhanareeshwara (Half Shiva and Half Shakti). Stubborn Bhringi assumed the form of a wasp and tried to bore through the middle of the body to complete his obeisance to only the Shiva side of the form. Infuriated by his attitude, Parvathi cursed Bhringi to lose all that he had got from his mother. It is believed that our body has seven datus namely Rasa (Tissue Fluid), Rakta (Red Blood Cells), Mamsa (Flesh), Meda (Fat), Asti (Bone), Majja (Bone Marrow) and Sukra (Reproductive Fluid).

The Rasa, Rakta, Mamsa and Meda are contributions from mother while Asti, Majja and Sukra are got from father. So Bhringi lost the tissue, blood, flesh and fat. With only skeleton he was unable to stand. Bhringi understood about the union of Shiva & Shakti. But he learnt it in hard way. Taking pity on his condition Shiva granted him a third leg to support his body. From that day Bhringi has three legs and he went on to become the dance master for devas.

This Puranic story is very expressive of the idea that Shakti is an integral part of Shiva. At the same time it can be understood so that nothing can be excluded as something that will not be complete without accepting the human angle to the divine. The physical aspect of our mind is inseparably linked with great spiritual comprehension.

The Purusha and Prakriti are both tied and it would be so silly to avoid one for the sake of another, without understanding that they two are bonded to each other. Purusha is the highest Truth. Prakriti is Reality and the source of stimuli, the destination of responses, the fountainhead of experiences, desires, and learning.

Shiva’s purity and dispassionateness is balanced with Shakti’s involvement and passion. Both balance the whole universe.

Universalist and Fatalist who believe in "VASUDHAIVA KUTUMBAKAM"